On Monday evening I launched a Teespring campaign to raise money for Outreachy, a fantastic nonprofit that helps underrepresented people in tech find internships. The shirt in question reads “‘LADIES’ IS GENDER NEUTRAL” and is only offered in women’s sizes. However, I presented the women’s sizes as unisex and replied to requests for men’s sizing with phrases women have heard many times.

This rustled some jimmies.

Regardless, the campaign took off and, as of writing this post, we have raised over $2k for Outreachy. Many people jumped onboard, excited to turn the tables on the many uses of “guys” as a gender-neutral term of address.

However, “ladies” is not gender-neutral. Neither is “guys.”

Neither term is correct. Both erase some section of the population, and choosing one over the other isn’t the correct action. Even if you think using “ladies” is transgressive, you’re still erasing some part of the gender spectrum.

When addressing a group of people, no matter how small, you should use a true gender-neutral form of address. For example:

These are all great ways to include people in both personal and professional settings.

So, why didn’t I make a shirt that says “JUST USE ‘FOLKS’” and offer it in every cut? Because, sometimes, the best way to expose privilege is to take it away. Many men expected me to include men’s sizing by request. By telling them no, I gave them a choice: don’t participate in something you enjoy or adapt to the only option given.

This is a choice marginalized people face every day. 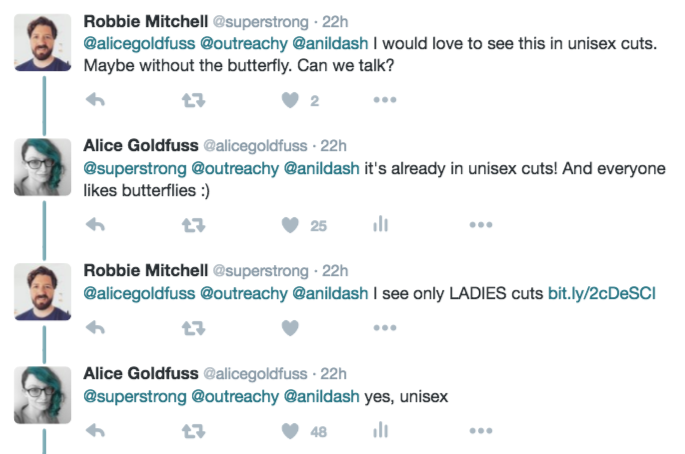 Usually I am all for inclusion, but I used this campaign as a way to make a point. And, let’s be clear, all I did was exclude men’s sizing for a shirt. I didn’t deny anyone jobs or access to healthcare. That would be cruel.

I hope this has opened some people’s eyes to what it feels like to be excluded, and how something so simple as a shirt that fits can make an impact. I hope people have a better understanding of how easy it is to be erased from public dialogue. I hope this influences actions going forward.

Something this campaign also helped expose was society’s very limited view on what it means to be a woman. Society expects women to be short and slight, and any deviation from those rules is not supported. Despite offering women’s shirts up to 4XL in size, some women still couldn’t buy them due to women’s sizes being smaller and shorter than men’s. Usually these women have to buy men’s shirts, because they have no other options. 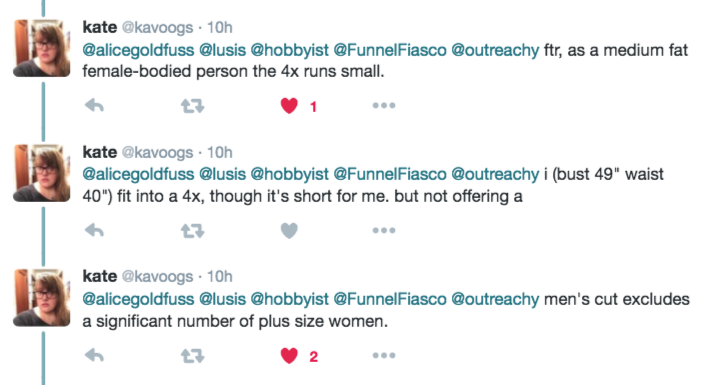 To those women (and nonbinary individuals, and people with gender dysphoria) I accidentally excluded with this campaign, I am truly sorry. You have my permission to take the design (found here) and make a shirt for yourself that fits.

My next shirt campaign will have both women’s and men’s sizes, but I want to emphasize that this is bullshit. Labeling clothing this way forces our bodies into a binary that doesn’t exist. I know men who wear women’s cuts and women who prefer men’s and there are many, many nonbinary people who feel comfortable in both or neither. In a perfect world, everything would be individually tailored to everyone’s bodies; however, the next best thing would be to use “fitted” vs “straight” labeling. Unfortunately, this is not yet an option in most shirt resellers.

In closing, to those of you who bought a shirt: thank you! You are donating money to an excellent cause. However, please do not use this shirt to end discussions. Let it be the beginning of a new one.