Foot-candles: the different paths to tech

Foot-candles: the different paths to tech

Despite working in tech with an engineering title, my only degree is a BFA in Film and Animation. While some schools emphasize critique in their film programs, mine was more technical and hands-on. That meant I was shooting 16mm film by my second week, organizing set crews by my second quarter, and did everything from directing commercials to writing my own imaging codecs.

It’s also how I learned about foot-candles.

A foot-candle is a unit of measurement describing the amount of light given off by one candle from one foot away.

You can measure the amount of foot-candles present in a space with a device called a light meter and then do math to convert them into lumens or watts, depending on what you need. In film and photography, you use foot-candles to calculate what f-stop to shoot at aka how wide your aperture should be.

I learned about foot-candles at the beginning of my freshman year. I used my manual light meter all the time, doing manual foot-candle conversions. Eventually we switched to using digital cameras with automatic exposure settings and the need for light meters, let alone foot-candle math, decreased. My light meter was always part of my kit, but the only people actually using theirs on set were the cinematographer and AC (assistant camera). I was an assistant director and didn’t need that knowledge anymore. 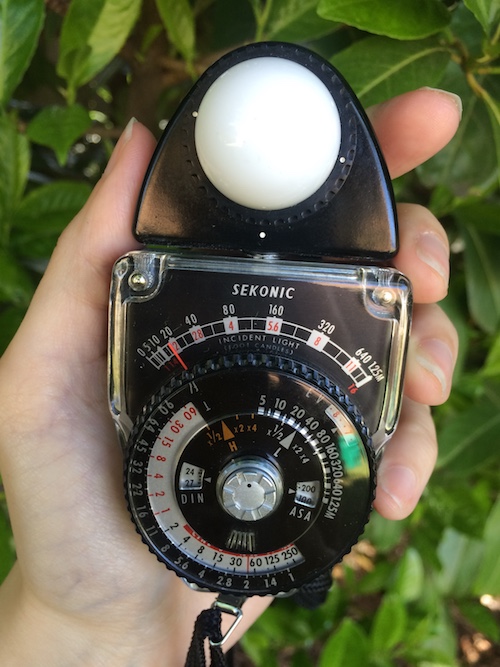 I still have it

Let’s say you want to get into photography and you ask for my help. Fantastic! I’m excited to teach you.

I get you started with a camera you already own: your cell phone. I teach you how to take better selfies and how to pay attention to basics like lighting, exposure, and composition. You apply these teachings to taking photos of other people, objects, and landscapes. You’re doing great! You even start an Instagram account because people love your photos so much.

Now you want to go deeper. You buy a digital camera with an automatic zoom lens. I teach you about long exposures, setting up your own lights, gels, and more advanced composition. Your craft is improving by leaps and bounds. You want to turn this into a career.

You’re deep into photography now and want to go whole hog: film. You buy an SLR and lenses. We cover film speeds, depth of field, paper types, unusual formats. You start going to workshops. You buy a textbook that covers shooting film, including how to calculate f-stops.

At one point, you look up from your book and say, “I just learned about foot-candles. How cool!”

I reply: “Oh, yeah! I learned about those in school.”

While knowing about foot-candles added some foundational understanding to my film degree, it wasn’t required to make films and the lack of it didn’t prevent you from becoming a photographer in your own right.

Foot-candles are specialized knowledge used by cinematographers and lighting experts. If you want to go into those or similar fields, awesome, you should know about foot-candles. But you didn’t need to know them to get as far as you did.

This isn’t helped by some (not all) CS grads holding holier-than-thou attitudes regarding programmers from non-traditional backgrounds. Nothing like having your abilities questioned both internally and all across the entire span of your industry.

However, talking to CS grads over the years, I’ve learned the following:

Hmm, how similar to my film degree!

Therefore, it stands to reason there are some CS topics which would qualify as lighting and composition and some topics that qualify as foot-candles. Such as:

Some of the foot-candles listed aren’t even covered in many CS programs, and the engineers who know them learned on their own. And you’d be hard-pressed to find a CS grad who still writes Assembly. That’s knowledge that helps with educational foundations but is only used in the professional world by specialists, such as malware researchers. Most traditional software engineers learn it in school and never touch it again.

"What about their four years of experience in college?"

Using Stanford as an example, an undergraduate degree is 180 units. At least 43 of those units must be in CS. So a BS spends about 25% of their 4 years actually doing CS classes. 🤔

The deeper you dive into programming, the more you will run into topics covered by CS degrees. This may make you feel extremely behind and out of your depth. When this happens, keep the following in mind:

Also, use your CS grad friends as a resource! One of the biggest hurdles in being a self-guided programmer is not knowing what you don’t know. CS grads can point you to syllabi, books, articles, concepts, and terms that you may never have found on your own. And most of them are happy to teach.

And when you reach a new topic, something new and exciting to dig into, remember that you’ve come this far without it and it just may be a foot-candle.

Thanks to Marc Hedlund, Brad Greenlee, Julia Evans, B Byrne, Marco Rogers, Amy Nguyen, and Keeley Hammond for their feedback on this post and Camille Fournier for inspiring it.