About a month ago, I had the pleasure of taking a tutorial led by the fantastic Brendan Gregg on creating FlameGraphs using the Linux perf toolset. I recommend reading his many blog posts on the subject, but in short: while perf is an excellent resource for debugging kernel and user space processes, FlameGraphs make the data even easier to consume.

Now, if the process you’re trying to profile is Java, there are some extra hoops to jump through, which Brendan has also detailed online.

But if the Java process is in a container, it’s even more annoying. That’s where this post comes in.

As explained in Brendan’s blog post here, perf doesn’t work out of the box on Java, because Java doesn’t automatically expose stacks and method names. Running perf without these gives you something like this: 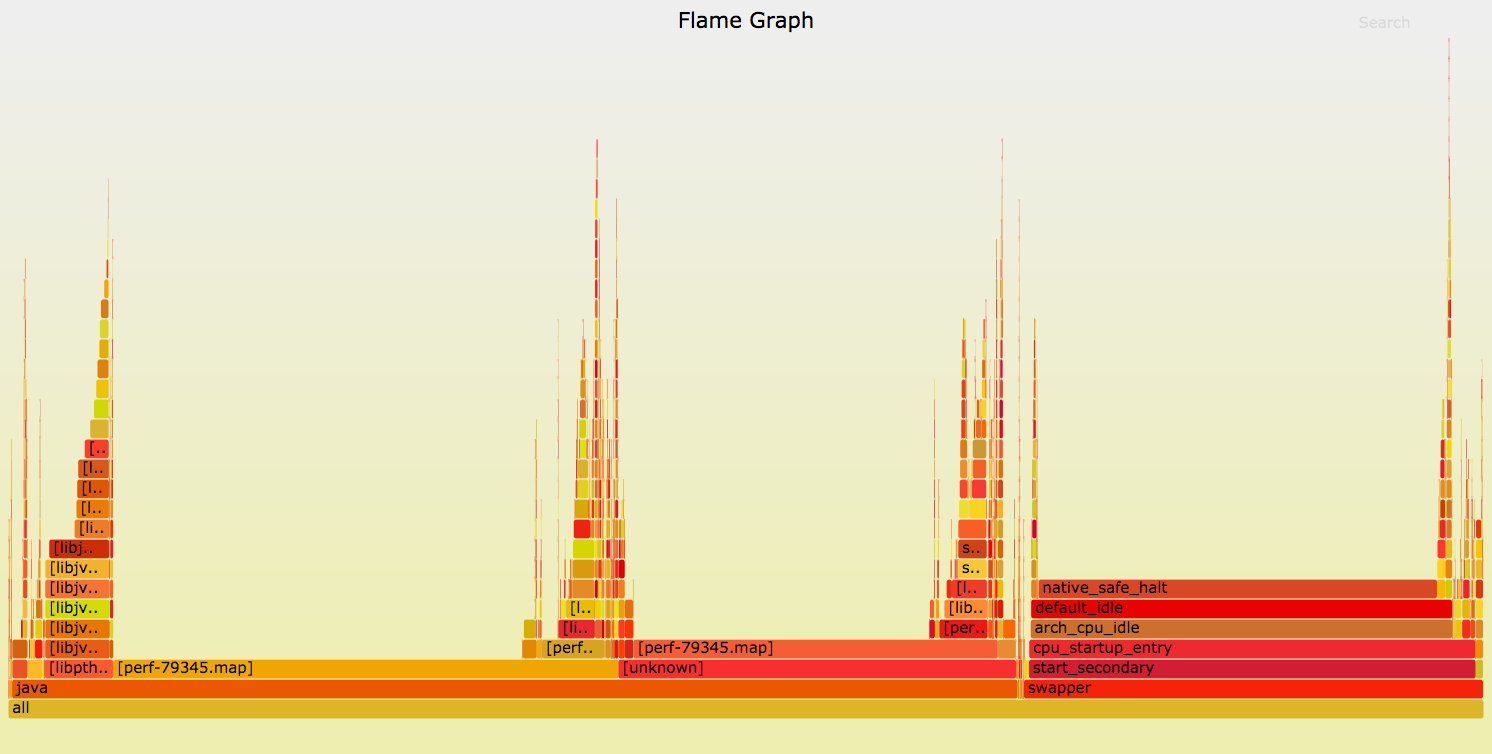 Notice the nondescript frame dedicated to “java”? Not very helpful.

Running Java with the option -XX:+PreserveFramePointer (starting in JDK8u60) will expose the stacks. However, without the method name symbols, you get this: 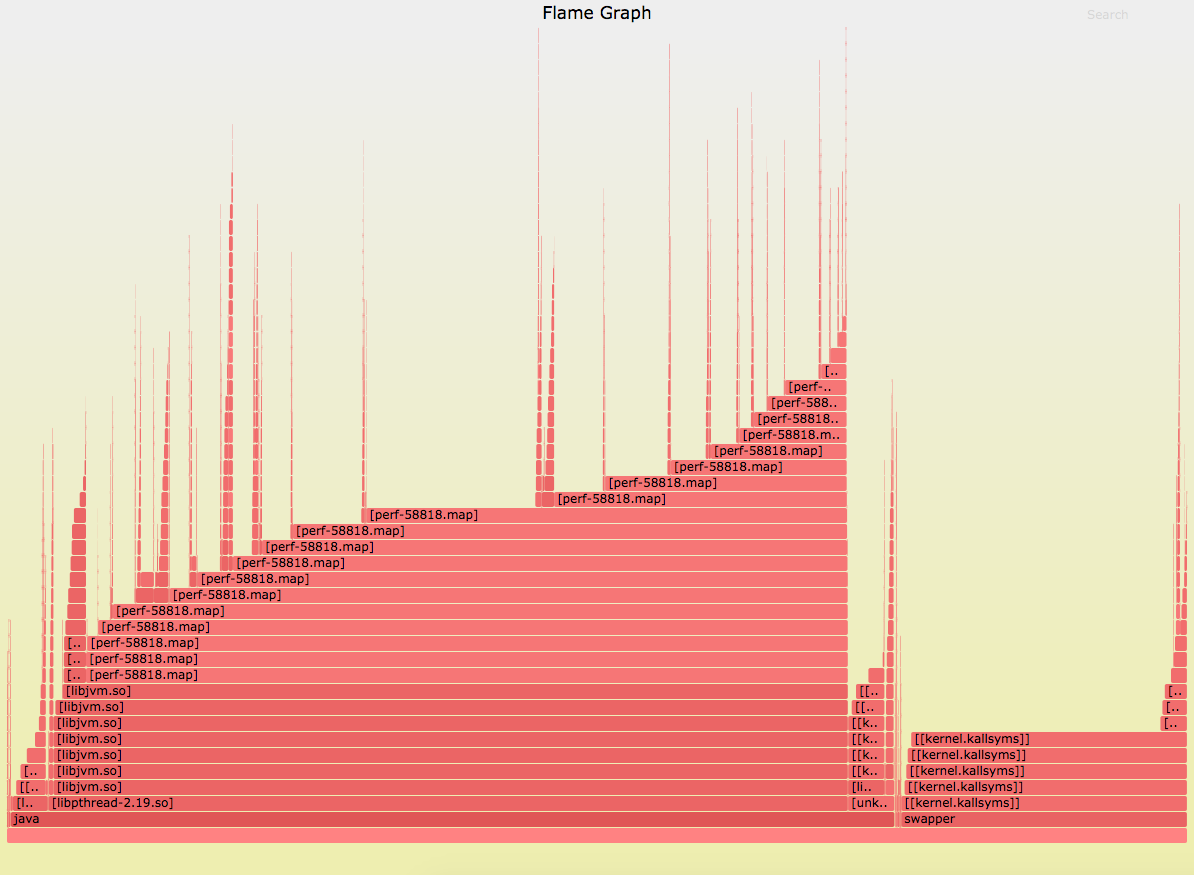 You need to also collect and dump the symbols of the running Java process, so perf can apply them to the correct stacks. This is made easier by Johannes Rudolph’s perf-map-agent repo. It has some scripts that will dump the Java process symbols and even integrate with the FlameGraph repo to make the graphs for you with one command. It’s pretty slick.

Containers, for all their hype and mystery, are still processes on a host. Run a ps and you can see all container processes running the same as noncontainerized ones.

That Java process is running inside a Docker container, and from the point of view of the host, it has PID 88834 and UID 103.

Inside the container, that Java process has PID 27 and is owned by the cassandra user.

Herein lies the issue. Due to a bug in Java, you must dump the process symbols while operating as the owner of the Java process. The perf-map-agent scripts require it. But the process owner (cassandra) only exists within the container. Meanwhile, the perf toolkit must be run as root, and it’s common practice not to allow root within running containers.

So, how can you dump the symbols?

The hack (“workaround” is too elegant a word) is to run perf outside on the host, dump the symbols inside the container, and marry the two resulting files in the same space to make a FlameGraph.

You will need to alter this command depending on where your perf.data file resides in relation to the FlameGraph repo. 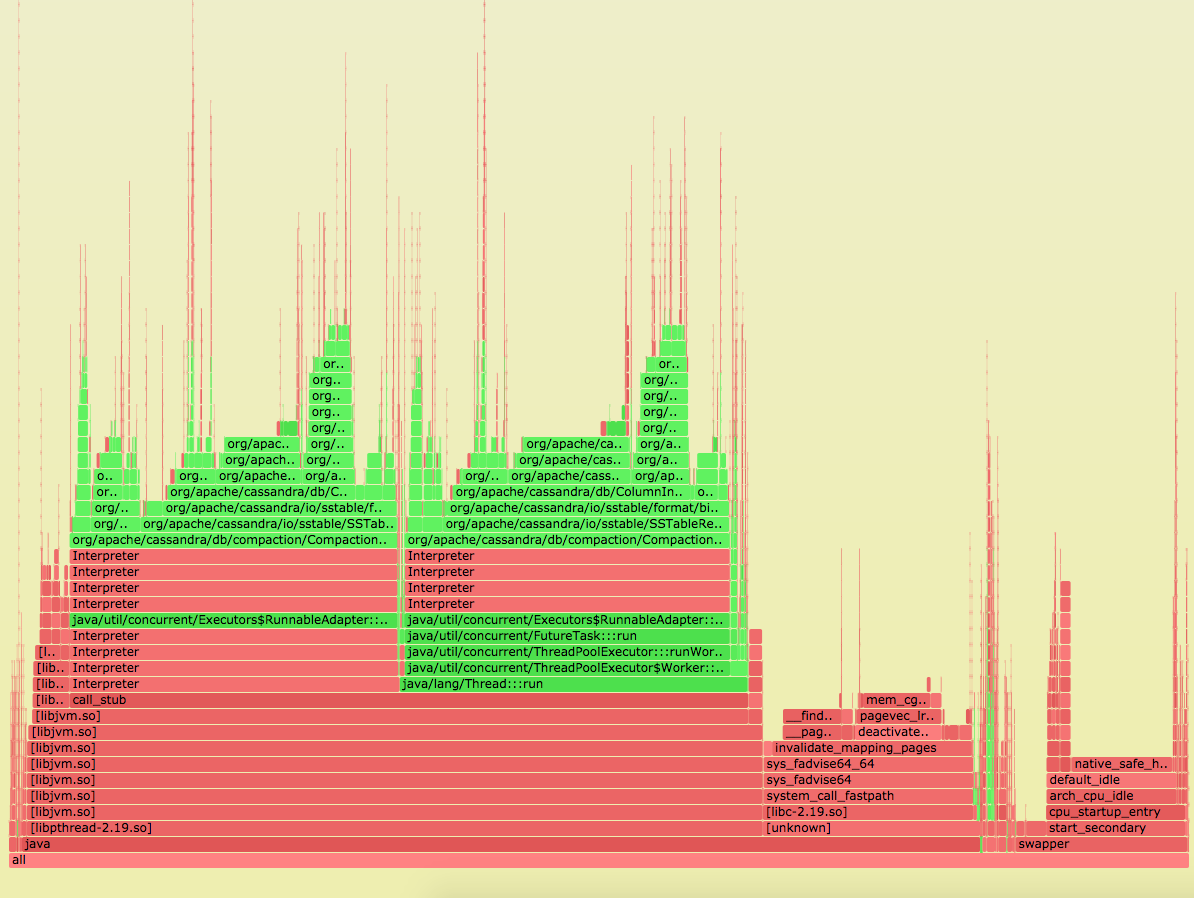 Why is this hack needed? Why can’t we dump the symbols outside the container?

At first glance, it seems easy enough to just create a cassandra user on the host with UID 103. But trying to dump the Java symbols gives us an error:

This is the same behavior you get if you try to dump the symbols as a user who doesn’t own the Java process. So, the host’s cassandra user can’t attach to a socket. What kind of socket? JMX or UNIX? Not sure. The documentation isn’t super clear.

I talked to several people about this and each conversation ended in puzzlement. Usually I would only post once I had all the answers, but I think it’s good to illustrate that everyone gets stuck sometimes. And it’s better to get the hack out there as a stopgap in the meantime, clunky though it might be. I look forward to a more elegant solution.

I want to thank Brendan Gregg, Johannes Rudolph, and Nitsan Wakart for creating and maintaining the FlameGraph and perf-map-agent repos, as well as helping me initially troubleshoot. Thank you to Jérôme Petazzoni for his unique container systems knowledge and my colleague Mike Hix for poking at namespaces. I am proud to work with all of you and delighted to occasionally stump you.