For the majority of my life, I was not a social drinker. Not only did I abstain from alcohol, but also any sort of caffeine not found in a good hot chocolate. I made it through high school, college, and the first years of my professional life without a beer, latte, or late-night crunch energy drink.

Some of it was personal morals, but most of it was personal taste. I would sip friends’ drinks, make a face, and return to my water and cake. I was fine with this, because I was staying true to myself. And the people worth keeping in my life didn’t care. But I knew I was missing out.

In early 2016, I had the fantastic opportunity to speak in London. This was my first time traveling abroad, and my small-town USA heart was overjoyed.

I had traveled between time zones before. I had worked nighttime on-call pages before. Combined, those experiences almost prepared me for West Coast to UK jet lag.

The first morning felt like dying. I couldn’t walk straight, couldn’t think straight, and almost vomited into the spacious marble sink. But I knew I needed breakfast. I knew this was required to adjust. So I dragged myself to the restaurant of London’s Mayfair Hotel wearing jeans, a hoodie, and bright orange slippers. 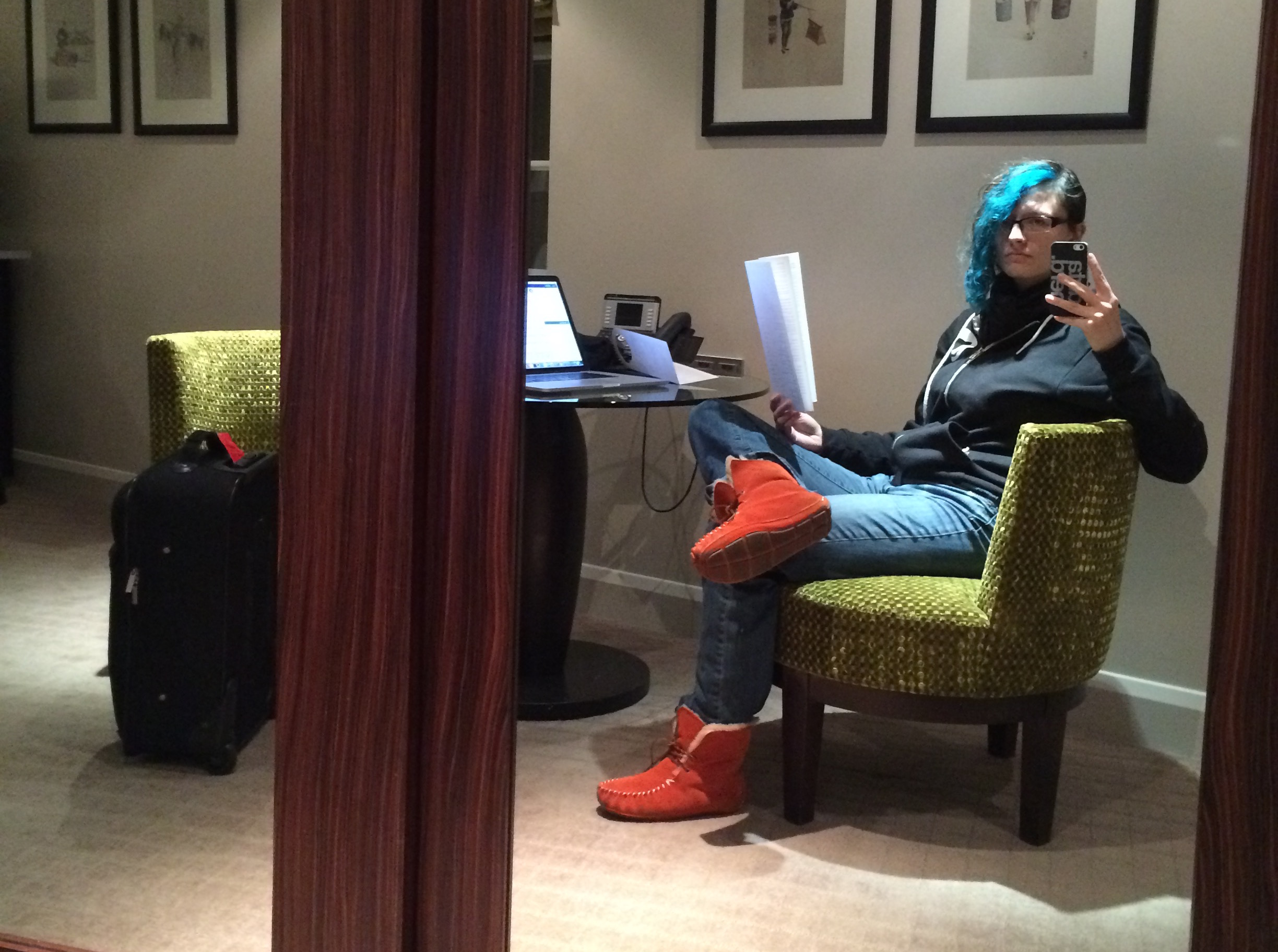 Looking back on that meal, I’m surprised I wasn’t escorted out by posh security guards in tuxedo jackets. I walked in without a reservation (didn’t realize I needed one), past the hostess (didn’t realize there was one), sat at a table of my own choosing (probably meant for someone else), and stared into space. Compared to the elegant travelers around me I looked deranged, but I was trying not to throw up while also figuring out how everyone else got food (a buffet twenty feet behind me). Each second was a decade in my own personal hell, and if I didn’t eat soon I was going to pass out.

At some point one of the waiters must have taken pity on me, because they brought me a pot of tea.

I had tried tea in the past multiple times. Peppermint tea had always smelled so good yet tasted so disappointing. Chamomile helped me sleep on anxious nights, but was a gross brew. A friend had even made me a cup of chai with extra sugar, but even that was too bitter for me. It seemed tea would never be my thing.

But on that morning, I needed sustenance. I still hadn’t figured out where the luscious dishes at neighboring tables were coming from, but I was conscious enough to know that stealing them with my grubby American hands was a no-no. And the pot of tea had come with milk, sugar, and honey. Which was food.

So, I poured a cup of tea, added some milk and honey, and took a sip.

That tea was my salvation.

It was one of the best things I had ever tasted. It was food, it was freedom, it was sanity. I no longer felt like throwing up. I poured another cup, burned my tongue, kept drinking anyway. Another waiter brought me a menu (I must have looked so pathetic) and I ordered Eggs Benedict. I then learned the joy of cutting a hearty egg dish with a good cup of tea.

I lived off tea the rest of the week. I drank several cups with breakfast, again at lunch, and with an afternoon break when possible. Around Day 3 I remembered that tea has caffeine in it and maybe that’s why I still couldn’t sleep at night. I backed off to give my poor virgin system a break. 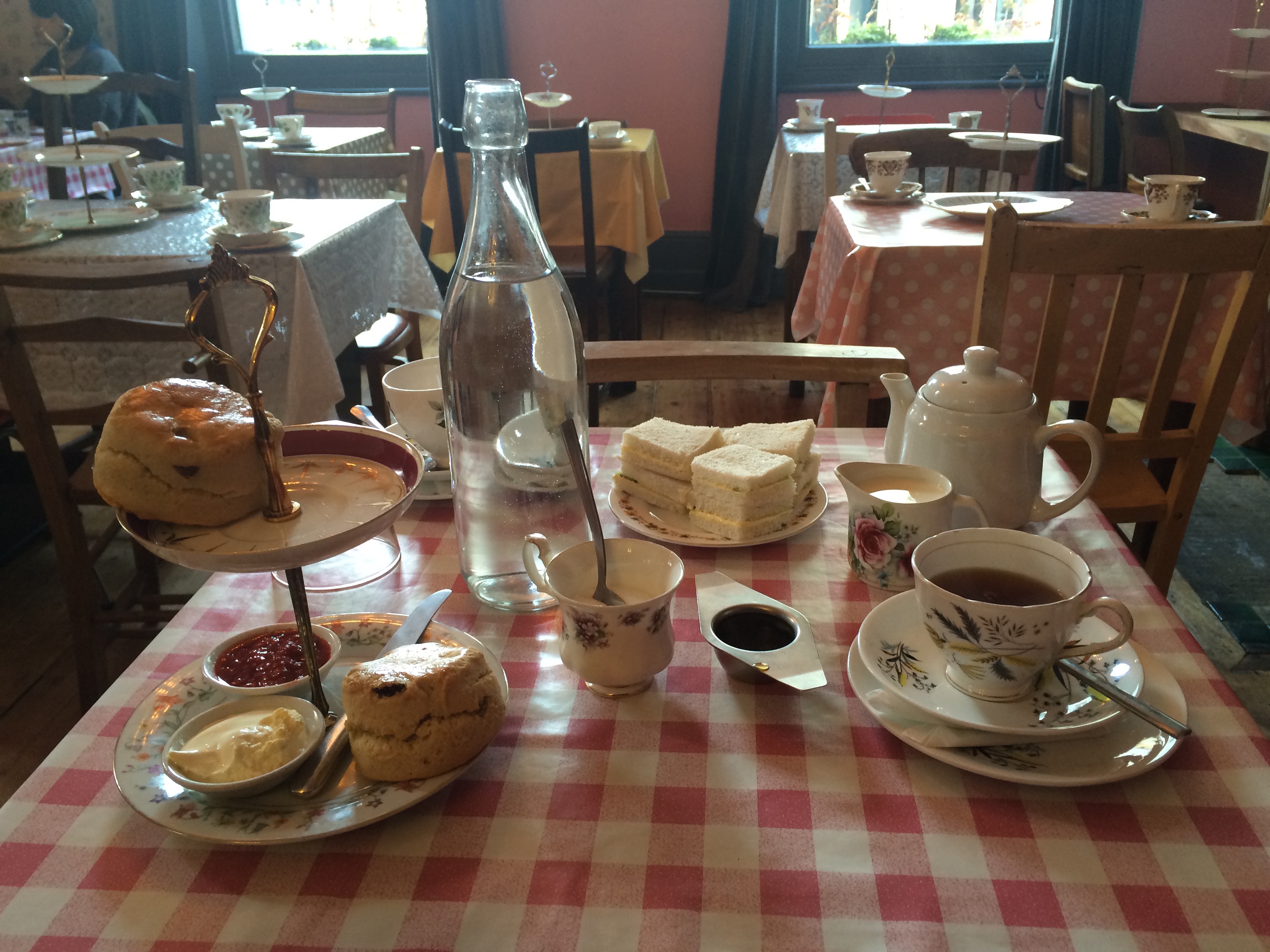 I brought my obsession home with me. I bought tea, cups, a cart. I had tea with friends and family. It tasted the same as before my London trip, but my newfound Stockholm Syndrome now associated it with comfort, excitement, and not dying in a ritzy overseas restaurant. I was hooked.

So, why did I write a blog post about tea? First of all, this is my blog and I’ll do what I want. And don’t even think I got all my tea thoughts out. Not even close.

I wrote about tea because tea doesn’t make me better at my job. At all. I don’t usually drink tea at work, preferring to save it for the weekends when I can savor it. I definitely don’t down a cup every morning to help me computer with confidence.

Yet, drinking tea has made my job much easier. People give it to me, offer to drink it with me, use it as an icebreaker. It’s both a gateway to interesting conversations and a reward for doing favors. I now participate in a social experience that is easy to quantify, repeat, and leverage. 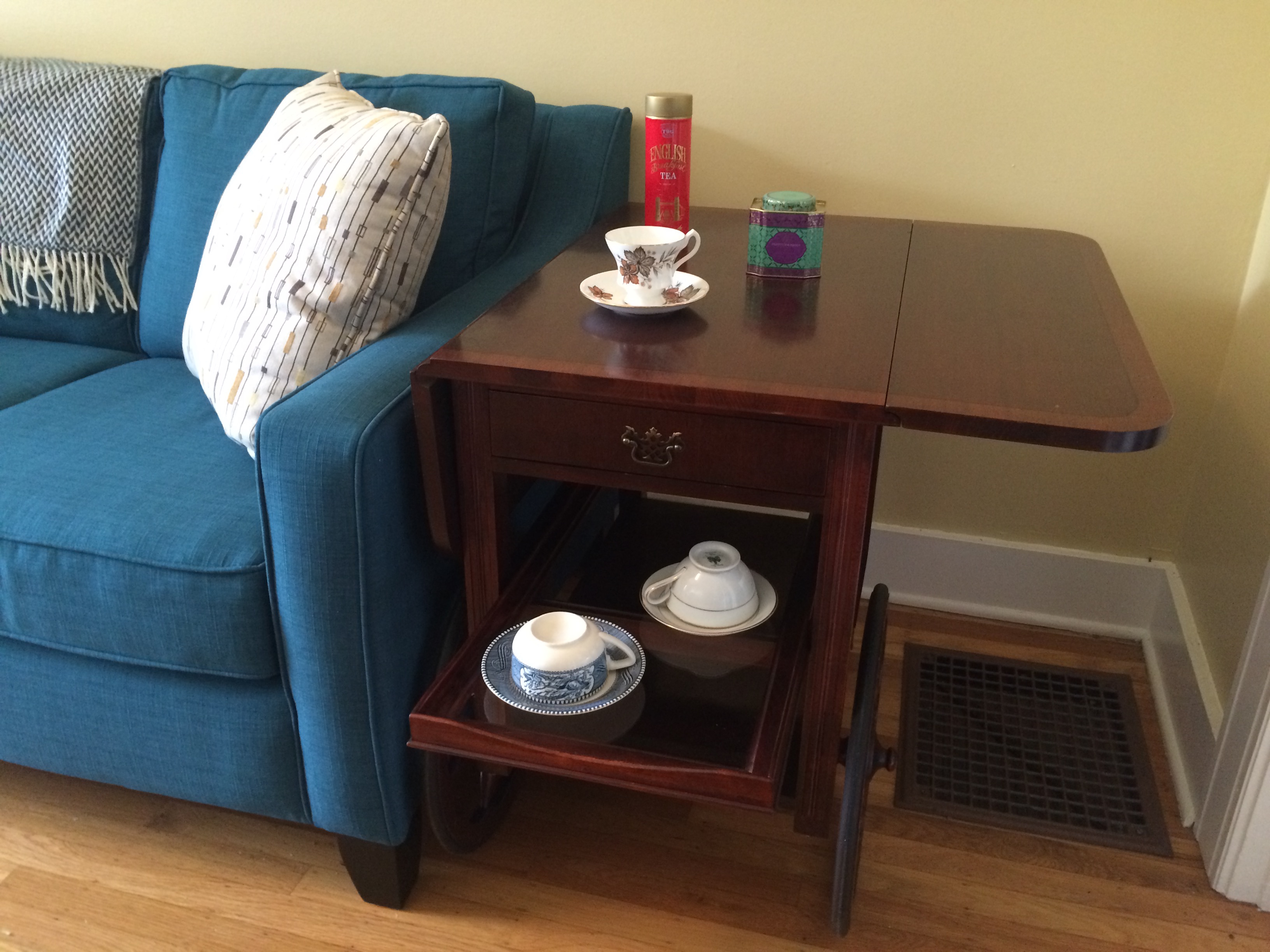 Think of how many times social drinking has been a part of your career. Getting coffee before scheduling a formal interview. Grabbing a beer after work. Receiving a nice bottle of Scotch to celebrate meeting a difficult deadline. Social drinking allows us to easily categorize and connect with people through experiences and gifts. And for most of my life I operated without it.

This made everything, from networking to connecting with my coworkers, difficult and awkward. I know I missed out on opportunities because my water and brownie were out of the norm. I was even told at one point that I couldn’t be trusted until I drank alcohol. I didn’t fit in, in the simplest of ways, so I was left out.

You know what other social shortcuts I don’t have? Building a computer with my dad. Learning to solder in Boy Scouts. Traveling abroad as a kid. All common experiences among men in tech. All used to connect at networking events and in interviews.

Here are some experiences that I have, but other tech workers don’t:

None of these things make someone better at working in tech (let’s face it, reddit and HN make you worse). But they are often used as a litmus test to judge competency. I’ve even heard “ask them if they like <geek hobby>” as an interview tip. If someone has a background similar to yours, you can relate to them easier. Surely this person is smart and nice, because they like the same movies you do, and you are smart and nice. This is culture fit.

A lot of people missed out on my skills because I didn’t fit their culture. The same is true for many underrepresented people in tech. Asking those in power to not only look past a difference in appearance but also a difference in experience can be too much to handle. This is why “diversity in tech” so often looks like a white woman who speaks like the typical male nerd. 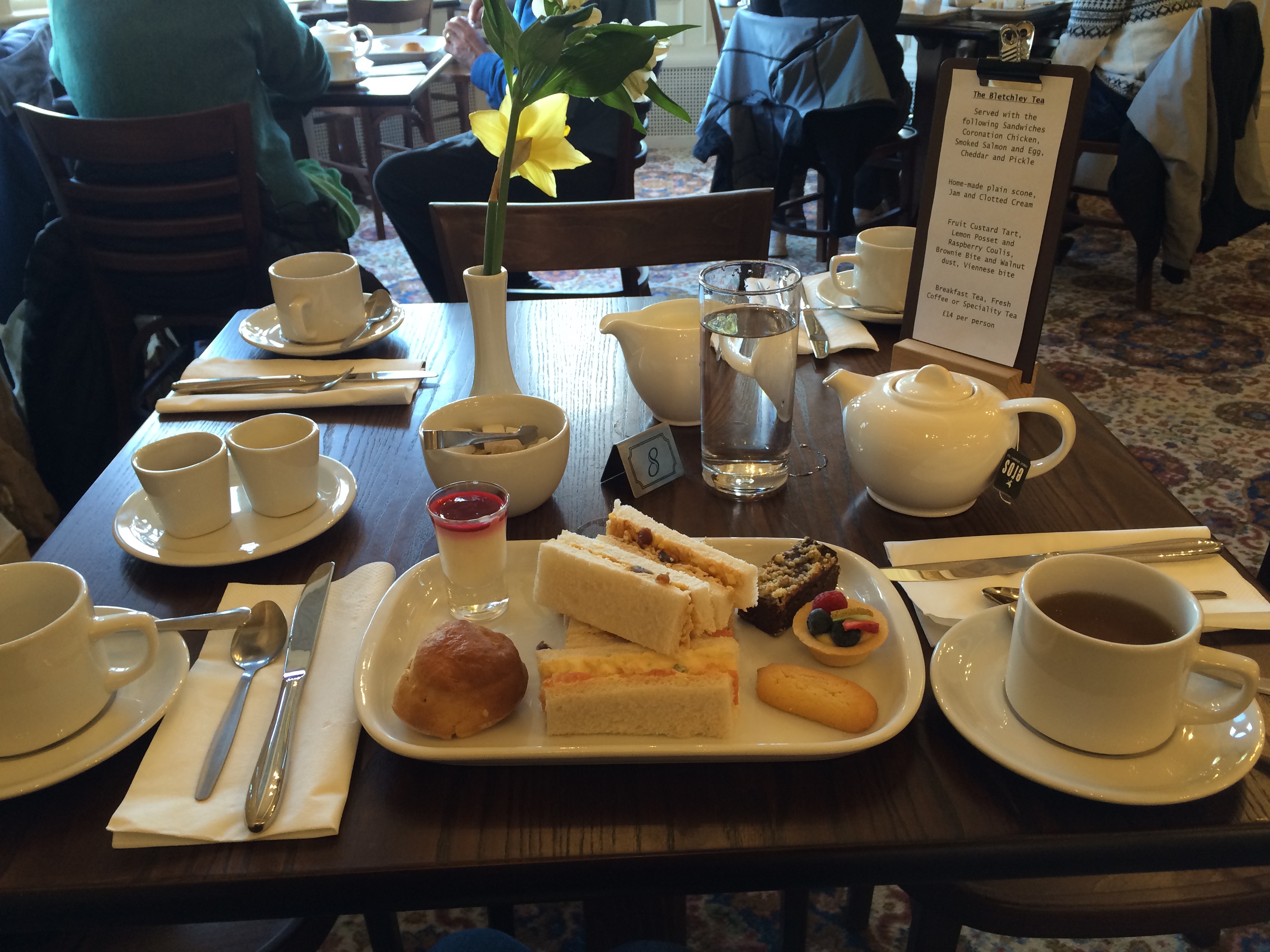 Many tech companies are getting into the groove of doing cultural interviews alongside technical ones. But many, usually startups, interpret “cultural” the wrong way. Instead of evaluating interpersonal communication, they look for people who also enjoy a good game of beer pong. They use social shortcuts, assuming it will get them the best people (aka people like them). And they miss out on awesome talent.

How can you avoid this? In addition to technical skills, interview people based on communication, teamwork, problem solving, ability to ask good questions, and how fast they pick up new concepts. Don’t use hobbies as a litmus test.

Think of it this way: if someone was a smart, kind, and considerate coworker, who enjoyed mentoring and gave great code reviews, would it really matter if they’ve never seen Star Wars? If you can’t imagine something causing interpersonal issues on your team, why interview for it?

Consider how your team interacts together at and around work. Are you reinforcing an environment where only one or two types of people would thrive? Every time your team celebrates at the bar, you’re not only excluding people like me, but former alcoholics and members of some religious faiths. At the same time, don’t make it awkward when someone doesn’t get a pop culture reference or doesn’t want coffee with the morning bagel order. This is your opportunity to make them feel welcome.

Don’t think of it as culture fit. Think of it as culture add. We learn when things are new, and things are new when they’re different. Think of how much you can learn from someone of a different ethnicity or socioeconomic class. There are swaths of foods, music, philosophies, traditions, and fashions that you don’t know. Why limit your life to the several shades of your norm?

I mean, unless you want to miss out on someone like me.

For more insight on alcohol as tech currency, please read this excellent article by the fantastic Kara Sowles.